During this year’s Shape 2010 conference in Zurich-Oerlikon, Microsoft Switzerland announced the winners of the Best of Swiss Silverlight 2010 Award in collaboration with the Best of Swiss Web Association, simsa and Netzwoche. 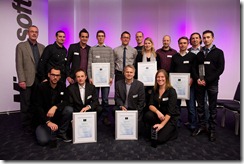 Incredibly my application Trails of Switzerland won the Bronze award. I was completely taken by surprise (not to mention super excited) because I didn’t really expect anything when I started the project. In fact it was just a “weekend project” to try a couple of things. When I saw the award application form I thought it could be worth a try so I polished a bit the front-end and added a couple of cool gadgets.

I was familiar with the competition’s application procedure also because I already did it a few times before for my company (that won this year’s .NET Award by the way).

My application leverages Silverlight’s DeepZoom component to show a full topographic map of Switzerland. The base image is a huge 19 Gigapixels (~3 Gigabytes) JPEG, but movement and zooming is wonderfully smooth.

The tricky part was mapping the GPS data to the map and then keeping content synchronized with the DeepZoom zooming and panning.

Currently Trails of Switzerland is in closed-beta at http://maps.frenk.com and will probably never go live (except if someone wants to buy it from me) for the simple reason that copyrights on the maps are incredibly expensive and I cannot afford to buy them “just for fun”.
To be honest I must say that the Swisstopo maps are of incredible precision and quality, but still are way too expensive for a no-profit application.

The good part is that Trails of Switzerland could probably be ported to Windows Phone 7 (with a major restyling of course) as DeepZoom seems to work very smoothly there too.

The conference was very interesting as well. In particular Bob Muglia should have taken notes from Ronnie’s talk on HTML5/Silverlight. If you have watched the PDC2010 keynote (and the twitter/blog-storm that followed) you know what I’m talking about.

As always Laurent’s Bugnion’s talks were interesting, but also many others were worth the trip (in particular from a Windows Phone 7 and design/UX standpoint).

Moral: you never can tell

Moral of the story is you never know where a weekend project is going to bring you. It seems that someone else also agrees on this. This is one of the things I love in this field.

Thanks to Microsoft Switzerland and most of all thanks to my wife for the continuous support and for understanding when I forget stuff/don’t listen because I’m thinking about code (i.e. most of the time) :-)