The second project I recently completed in F# is a completely different animal. While the first one is a pet project I’ve put together in my spare time (with no deadline at all), this one has been a full-time work for my company (for this reason I cannot disclose some details or share source code). Additionally, time available was limited. Very limited. Like 2 weeks limited. That’s 10 working days plus a 2-days emergency buffer.

My company produces a high performance client-server platform that ships with our own proprietary database engine. After some important changes to the server and database codebase, we needed to test the system’s behavior under heavy load, i.e. when a large number of users are connected and firing queries.

As you can guess, hiring and coordinating hundreds of people to load the system the way you need is very impractical, if possible at all. Maybe it’s doable if you have your own Army of Clones, but we don’t have one, so we had to somehow automate the process. Keep in mind that the server interface is proprietary, i.e. it’s not http, SQL, or anything similar: we have to go through our library and API to access the server. For that reason we could not use any existing tool.

The application I was going to build was meant for internal use but it was clear that something usable by non-über-geeks would have been nice to have at some point (for example to help sizing hardware for large customers). Anyways, being the deadline very close, it was imperative (no pun intended) to focus on the most important stuff.

Writing your own DSL

I decided to define an external DSL to describe the simulation scenarios. The language would let you express the creation of users, connections, queries, pauses, etc. in a simple way.
The second decision was to use F#. Fortunately nobody objected (again no pun intended). I was to work on the project alone, so I could basically use whatever I liked.

Once I defined the grammar I went to step 2, i.e. parsing. Obviously I was not going to reinvent the wheel by rolling out my own lexer and parser so the choice was between parser generators (FsLex/FsYacc, Irony for C# & co.) and combinator libraries à la FParsec. After taking some advice from the great F# community on Twitter (thanks Robert!), I opted for FParsec. I admit it looked a bit intimidating, but the idea of not introducing a tooling step in the build process was appealing, plus I had never used a combinator library before and was curious.

Here starts the amazement. As mentioned, at first FParsec looks slightly cryptic, but once you get the main concepts and get over a few gotchas it just “clicks”. You quickly reach a point where reading the parser code is almost like reading the grammar definition. Making changes is a matter of a few minutes with a very low risk of introducing new errors. FParsec gives you an enormous flexibility and even if the learning curve is steeper than learning parser generators I suggest you look at it if you’ve never done it before. The official documentation is great too.

Anyways, in a few days I had a parser that lifted the input program to the abstract syntax tree. Sweet!

Note: in case you are wondering, the language I defined was not super complicated but also not trivial. It supports regular loops as well as parallel ones (iterations are executed in parallel), nested loops and a plethora of options on all the various commands. I opted for a rich syntax that results in programs that are almost written in natural language. I cannot disclose all the details, but you can get an idea by looking at the screenshots. 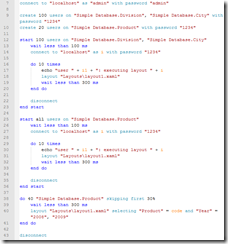 Second amazement: thanks to discriminated unions and pattern matching, walking the syntax tree is an incredibly fluid and easy process. The code is so compact and elegant that I keep opening that file just to look at it. No boilerplate, no class proliferation, no wasted characters. Just the code.

Unfortunately I could not leverage the powerful F# concurrency features to run parallel loops because the client library that interfaces with our server is not thread-safe, so all I could do was starting new threads with each its own separate AppDomain. My skills on asynchronous workflows & co. are still limited so I don’t know if there’s a better way. If that’s the case, I’d love to hear your feedback in the comments.

With parsing and interpreting done, the bulk of the job was over. I just needed to add logging and a less geeky interface than the command line. With room to spare, I created a WPF GUI that controls the execution and reads logs to display status and stats. This was nothing particularly exotic, but I was able to fit in some nice touches like a graphical timeline to represent operations executed on the different threads. I wrote the GUI in XAML/C# using MVVM-Light. The parser/interpreter runs in a separate process, so that in case of a crash (not a remote possibility when you are pushing the hardware limits) the GUI keeps running and tells you what happened. 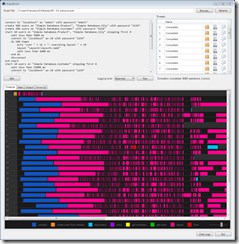 So 10 days had passed and this is what had been done:

plus some extras (that as you know better than me, are very time consuming):

Developing the GUI and producing the extras went at normal speed, but I’m positive that writing this parser and interpreter in C# would have taken me close to the ten days alone. Maybe my standards are low, I don’t know, but I’m honestly blown away by what I could achieve in such a short time. Also notice that I’m much more experienced in C# than in F#.

Truth to be told, I had another advantage: this project was done in the year ending period when several people are on holidays and the office is very quiet. I also put in some late evenings, but I have a family with two kids, I just cannot code 24*7 even if I wanted.

The stars of the show

The goal of this post is not telling the world how fast I work. It’s impossible for anyone to judge if a project would have needed 2 or 100 days without knowing all the details. No, I’m writing this because I know all the details and I know that F# gave me a huge advantage. Much more so than I imagined when I started.

These are things that I think make F# ideal for a project like this:

These are what allow libraries like FParsec to exist, amongst the rest.

This trio is worth alone the price of entry. They make for very terse code and bring other great advantages on the table as well.

It works the first time

I still don’t get why it is so. Maybe it’s because of the lack of nulls. Maybe it’s because (as I’ve written in part one) I think functional programming forces you to think more and write/debug less. The net result is that when I write F# I mostly get it right the first time. Because of the higher-order functions there are less corner cases that suddenly appear and crash everything.

Now most of these features are available in several functional languages, however the seamless .NET integration was fundamental in my case (the libraries I had to use are .NET), and some F#-only constructs make coding fun and speedy at the same time.

If you’re not living under a rock (like I’m literally doing right now –but that’s another story) you’ve sure heard of F#. Maybe you’ve even seen some examples, but as I’ve heard many times from C# developers, they looked incomprehensible. Don’t let that stop you, it’s just not true. If you’re new to functional programming it looks that way because F# is (mostly) a functional language, i.e. you’re not only learning a new language, you’re learning a new paradigm. A different way of thinking of your programs. It does take some effort, for sure. Is it worth it? It’s up to you to decide. To me, getting back to functional programming with F# after several years of OOP/C# has been a real breath of fresh air.

If you decide to learn more, here are some great places to start:

Advice for getting started with F# by Richard Minerich
An overview of functional programming by Dorian Corompt (recursion, lists, more to come…)

I suggest starting with the basics: you can already accomplish a lot with just lists, sequences, tuples, unions and pattern matching. When you feel ready you can move on to the more advanced topics.
Have fun!

Again, many thanks to Steffen and Samuel for the feedback!